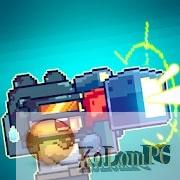 Cat Gunner: Super Force – pixel action arcade story which tells us about the country inhabited by cats. As planned by the authors, a meteorite falls into a once prosperous world and furry creatures begin to turn into zombies. You also need to assemble a team capable of destroying monsters. In total, you will find several dozen story missions, a wide selection of weapons, as well as various game modes. Stylish pixel graphics perfectly harmonize with the general atmosphere of the game.