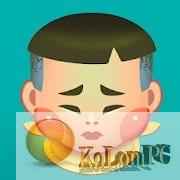 Behind The Screen is an android role-playing game that takes you into a surreal world filled with puzzles and hidden enemies. In this game you will live the life of a murderer, and to find out the truth you will have to penetrate deep into his childhood memories. This game includes solving numerous puzzles, hidden object mode and combat operations. The game was inspired by the real events taking place in Taiwan and made in the style of artistic book style where the authors mix reality and imagination. In the game you will be able to watch how the media destroys human life, as well as lead to an abyss of stereotypes and domestic violence.

Story:
It is an age when Internet was still before its time, a vicious crime had been committed that condemned nationwide. Through the screens, series of news reports flashed before their eyes. Everyone is a television judge hoping to sentence this foul murderer to death. You must discover the truth in the murderer’s memories.

Art style:
Our inspirations come from old hand-drawn color advertisements and posters which exists in the era before digital drawing and photography. During those times, painter blended reality and imagination and created a realistic style that mimics photos yet is different from traditional oil painting, thus making a picture book style art with great allurement.