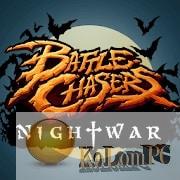 Battle Chasers: Nightwar is an exciting game that will tell you an exciting story where you will fight your enemies and explore the world. In this game, you’ll find yourself in a dungeon deep in the dungeon, where you’ll find step-by-step JRPG fights and a meeting with strong bosses. You’ll help young Gully find his missing father, Aramus, a famous hero who has gone on a dangerous journey. The main character will get help from five heroes who have unique abilities and skills. Go on a dangerous journey and explore the world far from civilization. Engage in battle with multiple enemies and use powerful weapons and unique skills against them.

BATTLE
The classic turn-based combat is inspired by console RPG greats. Up to three fighters per side will battle it out, in tactically demanding encounters.

EXPLORE
A huge world awaits brave adventurers. Discover the secrets in the dark and mysterious forests or brace yourself against the icy horrors in frosty regions or fight wave after wave of enemies in Tolka’s Arena.

CRAFT
Each of your six heroes wears armor, carries a weapon and is equipped with fine magical jewelry – and everything can be crafted.

SURVIVE
Battle Chasers: Nightwar is packed with enemies. Bandits, Beasts, Demons, Elementals, Machines, Undead – you name it! It’s crucial to react properly to the enemy’s attacks. If you don’t synergize the efforts of your heroes, your adventure will be short-lived.