Asphalt 9: Legends – 2018’s New Arcade Racing Game is a representative of the series of racing projects from Gameloft that has become incredibly popular among the followers of mobile devices. After all, despite all the “non-seriousness” of the platform the developer managed to give gamers an excellent product. Head and shoulders above its other neighbors in the genre. Excellent graphics, various cool sports cars, a few types of control (everyone picks up something of his own), as well as other qualities and features inherent in projects designed for stationary made the game a favorite of many riders. 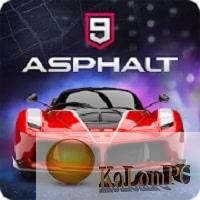 You, as before, will be waiting for dynamic races on the streets of various cities, where there is no limit to speed and recklessness. Unlike previous parts, you will get better modern graphics, more than 50 sports cars with the ability to improve them, as well as several ways to control.

Start the game with a short tutorial, where you will get acquainted with the control, mechanics and behavior of the car on the road. You can control the sports car by tilting the device and using swipes, there’s a button for nitrous oxide usage, as well as a separate button for drifting and emergency braking.

Everyone can not just try their hand at passing the career, but also to participate in gaming tournaments, where players compete from around the world. Players will also be able to gather a group of like-minded people who will unite to form a club. Will be able to interact with each other in multiplayer mode, open new stages, receive rewards and raise the rating of their club, trying to rise to the top of the world table among the hundreds of thousands of other players.