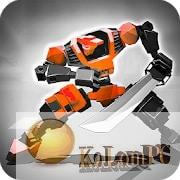 Armored Squad: Mechs vs Robots Online Action is a dynamic and exciting multiplayer action game with non-stop battles, numerous modes, maps, weapons elements and everything else that will please fans of team battles among real players. Nice to the eye low-polygonal graphics, setting fights Mech and robots, auxiliary equipment, different skills of this or that class, as well as many other things saturate the gameplay and keep it going for a long time. Fight, play football, find new friends, as well as train offline for the next best results.