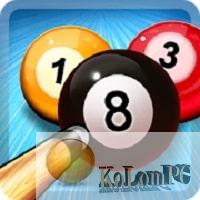 8 Ball Pool has been really great flagship from miniclip since it was introduced back in IOS/Android in october 2013 around 2 years back. It was quite famous on miniclip website as well as on facebook. Users can participate in player vs player game or play tournament and win in game currencies called chips. varies game modes requires varies chips win it and get it doubled. Game is real good with its awesome ball physics and good looking pool graphics. varies pool sticks available depends on how much you want to spend in your game. 8 Ball Pool MOD APK ( NO ROOT) Guideline Trick on Andropalace.net. Game was quite fun then they introduced the recharging stick options in the game as well as new free coins systems.game is a lot fun playing with friends and talking over VOIP. sometimes you end up with the pro player and you just can not get a single chance to hit the ball. game offers varies game modes as well as pool tables you can purchase using chips. collect free coins every hour or get help from friends. In terms of socialization this game did more than any other multiplayer game. It is quite addicted at first part then it takes time to be master. We are gathered here on a funeral of miniclip’s 8 ball pool, Because its been MODDED now. would like to say two sentences for our beloved Android/IOS/PC/FACEBOOK game 8 ball pool that it was a great fun while it last. Well let us go to the point what is in the MOD? it a guideline hack and requires no root access. it was only available for ROOTED USERS of XMODGAMES but now this trick came in a packed modded game so simply install and crack your way through single PVP or multi tournaments.